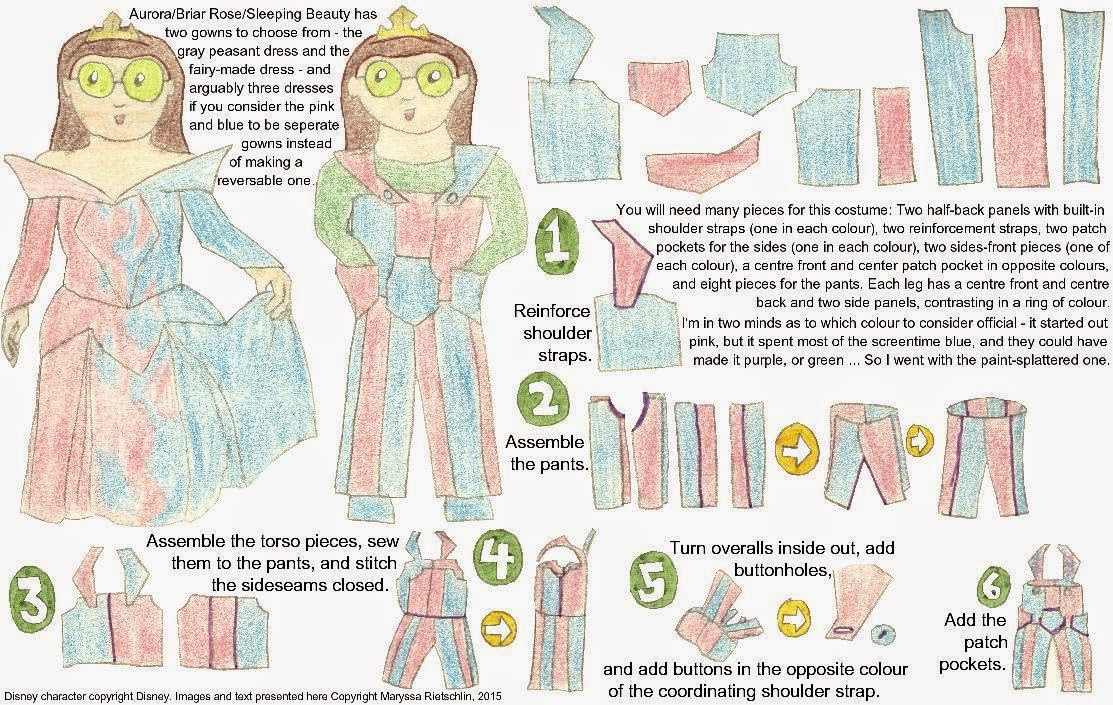 This was actually the first design I doodled for changing the princess gowns into overalls. I just didn't tutorialize it first because (A) it's probably the most complicated, (B) it's not my favourite dress, and (C) Cinderella had just been reinterpreted in live-action.

I did see the live-action Sleeping Beauty reinterpretation, 'Maleficent'. It was okay, but not great. Certain parts were very well done - but there were a lot of scenes that were just characters frozen in place, posing for the inevitable poster, or just close up shots of faces. I was disappointed that the queen didn't get to have a larger role - in fact, I think she had fewer lines in the remake than in the original - but I liked the depth given to the raven Diablo, and I was glad he didn't get turned into a statue. The scene with the dragon was very well done. I was disappointed they dropped the cover name of Briar Rose, mostly because there didn't seem to be any narrative reason for that change. I did not approve of Maleficent's skintight leather pants in the battle sequence, since the materials available at the time and the fact she arrived on horseback would have made loose canvas pants more believable, but the wing-return was impressive. Also, a lot of things were left open-ended when the movie cut to the credits, making the ending a little dissatisfying. The biggest disappointment was the lack of singing.

So, yeah. I mostly enjoyed it for the special effects. I would watch it again if I saw that it was on TV and nothing I liked better was on in the same timeslot, but I'm not going to purchase a copy.

Another blogger, 'Beaded Fae', did an excellent costume based more literally on the blue-and-pink 'paint-splattered' dress. Just type "Disney Sleeping Beauty costume paint-splattered gown" in a search engine and it should pop right up.
Posted by Made By Maryssa at 00:00